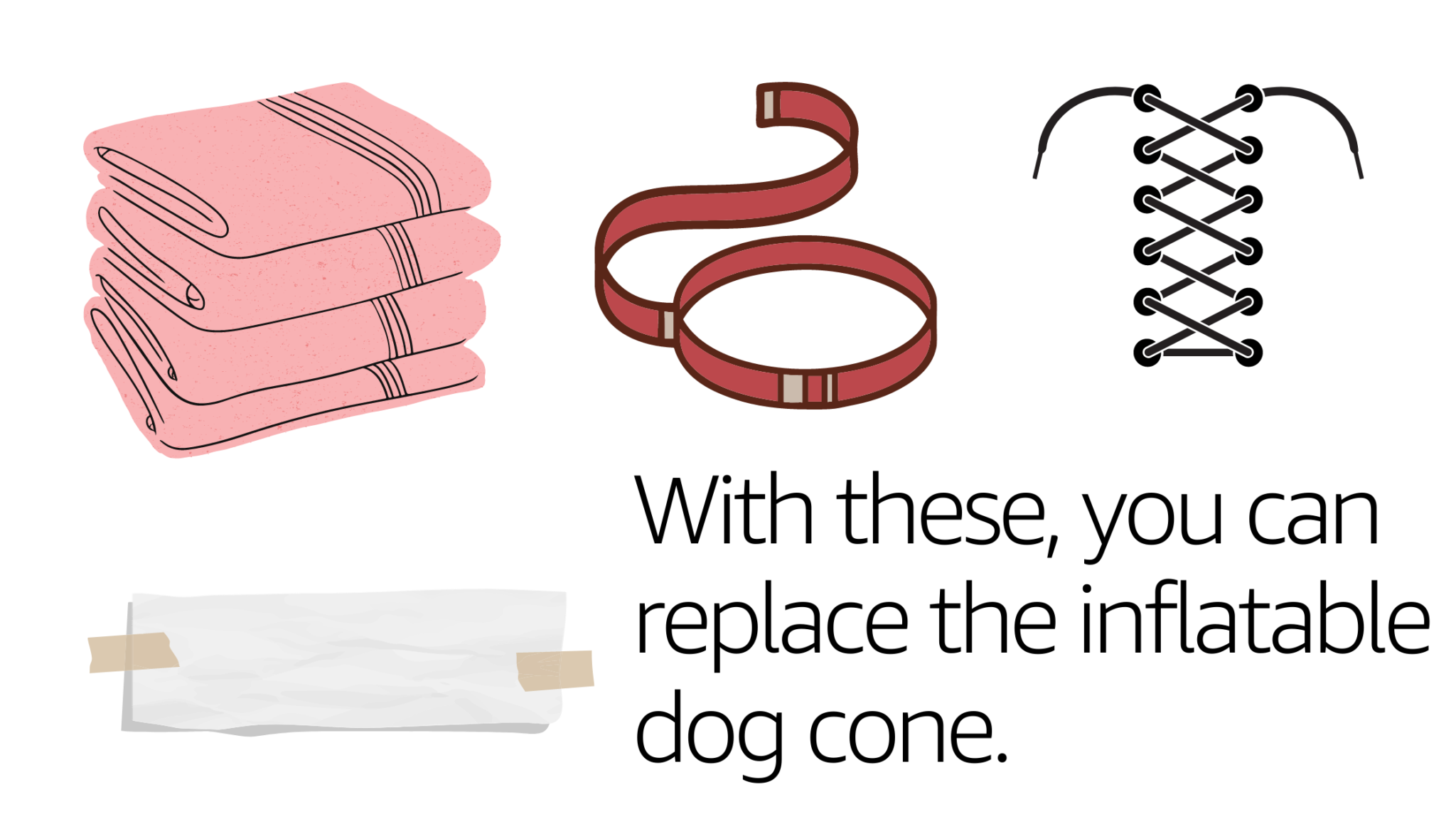 When I published my all-encompassing article on making an unshreddable pool noodle dog cone, it got me two things coming:

1. Overwhelming response to the article.

2. A request for a comfy DIY dog cone that can parallel specifically an inflatable or BiteNot dog collar.

And that made me realize two things:

So after rummaging the internet, I could find none but a towel dog cone offsetting inflatable dog cones for dog owners during the healing interim.

And you know what is the best here? You’ll find the required material lying in your house.

So keep reading to discover:

The rule of thumb: if you want it to fit, measure it first.

Tho you wouldn’t have to measure something with measuring tape like we do while making other sorts of DIY cones.

You’d have to be intuitive enough to compute in mind what size of towel would be enough to wrap around your dog’s neck thrice and wide enough to cover the area between his ears and shoulders; neck after three folds considering your dog’s size.

If your dog has a smaller/thinner neck, then you’d need a medium-sized or a little shorter towel, or if he has bigger/thicker, you can use a full-sized towel (a beach towel would be way beyond what we need).

You can use a kitchen towel for small dogs.

You can point a plate of smeared peanut butter at your dog so while he is distracted licking it you can wrap the towel around his neck.

1. Lay the towel lengthwise properly in front of you on the table or wherever it is convenient.

3. Keep your dog busy: you have to have your dog’s neck in a still position anyhow. Scrunch the beginning part of the towel (so it doesn’t loosen the collar later) and properly roll up the towel around your dog’s neck thrice (recommended), not loosely or tight but snugly.

Otherwise, it’d be irritating for your dog to wear, and he might become reluctant to it.

4. Ensure the end part/ edge/seam of the towel is at the top upside/over his neck, you can revolve the towel to get his end part up there.

5. Fastening/securing part: you have to choose between duct tape, shoelaces, dog collar, and vet-wrap velcro. I recommend you use either duct tape or vet-wrap velcro with shoelaces. minimum three 10 or more or fewer inches long strips of adherent tape.

Always remember, the more, the better.

6. Stick tapes on the top edge, middle, and bottom edge of the towel.

Here is a trick:

If you wanna know whether you have done a fair job at rolling up a towel around his neck or not, loop the towel cone through something, it should go across to the other side. Remember, there should be some between the cone and your pooch’s neck.

7. If you fear your dog will start pawing it, you can cover the cone with fabric and tuck its seams in the cone.

Take your duct tape or vet-wrap velcro or just dog collar and extend it or make it as big as much as it can be. Fold it into a flat collar and roll up thrice the towel around your dog’s neck and simply secure it with your dog collar or duct tape or something, not loosely or tight but snugly.

It has to be thick enough to not allow your dog to reach his sutures.

Here are a few frequently asked questions listed below.

What is a homemade towel dog cone?

Its name is pretty self-explanatory; a towel you make a cone of is used to wrap around your dog’s neck with some adhesive material, so it could impede him from gaining access to suture and licking it. It is considered not to be as invasive and terrible as the cone of shame.

Homemade towel dog cone/collar, a good alternative to the cone of shame/inflatable cone?

If your dog is bendy, flexible, relentless, naughty, cheeky, bendy, and has big legs and a long tongue (in short, a ninja), such as an adult German Shepherd, it might not work, but giving it a shot is highly recommended as it is easy to make.

It is all about your dog. If your dog is calm, then this collar works, it’s a great alternative to an inflatable cone.

Your pooch would get every sort of thing off him, you might even need to use a sedative after his surgery (it has happened).

One thing is true for sure cones of shame are invasive and terrible, and sometimes don’t even work at all.

Do I still need to put on a recovery cone if my dog isn’t messing with his incision?

Stitches/incisions/sutures start itching with days passing over time, like after severely 5 or 6 days, so you never know when is bad on your way.

What should I do if my dog pulled his cone off him? Any tips and tricks?

Shoelaces are very strong, you can fasten your dog’s recovery cone with them. He should not be able to pull it off again.

Other alternatives? What perks do DIY towel dog cones have? Which works best?

You can put on him any t-shirt and guard his incision and cover the excess fabric of it with a rubber band.

Some others are surgical recovery suits, inflatable cones, and kids’ onesie pyjamas (cut out round for his tail).

It becomes easy for your dog to consume or excrete wearing this collar, especially since it is softer, it has an edge over typical cones in terms of comfort while sleeping.

Hi everyone here, I am Saqib Malik, a canine lover, and a freelance content writer. Click here to read more about me.